In a statement Tuesday, the Council of Churches expressed concern that certain churches could be harassed because of their beliefs, noting that “hate and white supremacist activity” has been occurring in New Hampshire.

(August 19th, 2022) Insider.com runs an article complaining about this website because it warns about which churches are woke.

The list on "LibertyWins.org" titled "Christianity in New Hampshire," doesn't detail the intention of the list, but some critics on Twitter are calling the "wokeness" classification a "racist dog whistle" and worry that it will prompt attacks on the places of worship.

We shit you not, they actually published that.

Underwood as Select Board chair presented an amendment to the school district budget reducing it from $1.7 million to $800,000. The vote passed 20-14. It took less than 5% of the town's registered voters to redefine the school district.

(August 23rd, 2022) Progressive lobbying group The NH Council of Churches, representing 9 particularly woke churches, condemns LibertyWin.org for referring to their woke churches as "Woke". Please see our Christianity in New Hampshire page for a guide on which churches are likely to be woke, and which ones are less likely to be woke, to aid you in deciding which church you should attend.

It's a state that's 88% white with a Republican governor and no adult seat-belt law. Sure, they present themselves as charming, but deep down they are basically just Florida with foliage.

In view of the recent developments in Washington DC I feel an obligation to warn my constituents that this could happen in NH. With the 2020 election, it has become increasingly clear that the Free State movement is gaining ground. The strategy of moving people with right-wing ideology into the state to set up residency in small towns where they can more easily be elected is coming to fruition.

Stuff that was mailed out 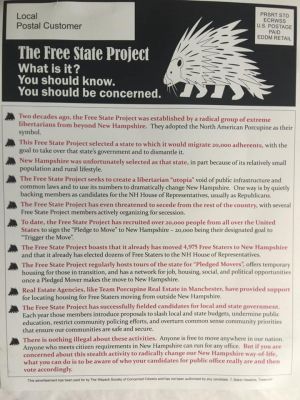 It’s almost like Republicans in Concord created the most teacher-hostile climate in New Hampshire schools of any time in history and, as a result, teachers don’t want to teach here.

Rep. Osborne doesn't mind if people move to NH for the purposes of voting to dismantle public schools