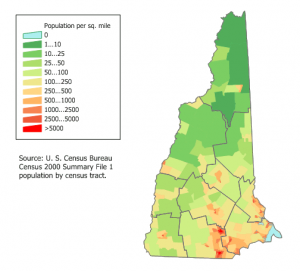 Most of the population of New Hampshire is focused in the south and the east, near the coast and the border with Massachusetts. Many parts of the state are still wild and untamed, as well.

If you're looking to live in an area with a lot of businesses, that is more easily "walkable", that contains restaurants, bars, and other amenities, Manchester, Portsmouth, Dover, Nashua, Rochester, and Keene are all good choices with good benefits and trade-offs.

If you'd prefer to live in a more remote location, there are many parts of the state with very low population density. Refer to the graphic for more details, however also know that large properties that contain a lot of land, forest, and wilderness are available in nearly all parts of the state. Look between major population hubs to get the best of both worlds.